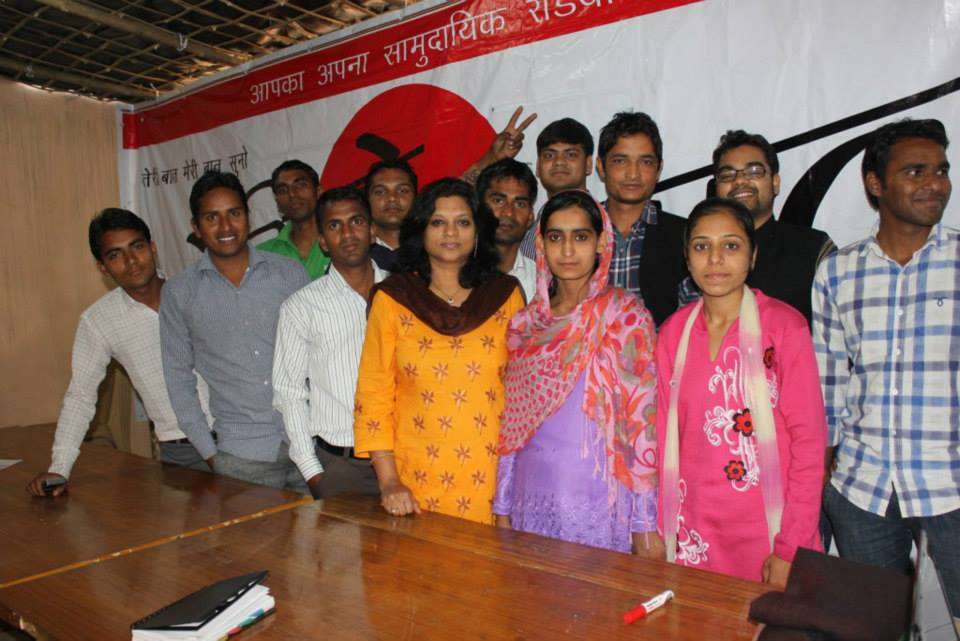 Published in The Better India on 28 October 2015
“Everyone should be in a position to speak, say, listen and be heard,” says Archana Kapoor.
Download

“Everyone should be in a position to speak, say, listen and be heard,” says Archana Kapoor. As the founder of a national award-winning community radio initiative in Mewat, Haryana, she is certainly giving voice to many who have long been quiet in this backward community

“I was buying a register during my exam from the nearby shop. The shopkeeper charged me Rs. 184. When I reached home, I opened the packet and saw that the printed rate was Rs 124. I had heard in the ‘Jano Grahak Jano’ program on Radio Mewat that no one can charge you more than the printed rate. So I went back and confronted the shopkeeper. He said as it was exam time the demand was more – I could take it or leave it. I told him that I would go to Radio Mewat and get it announced. Sheepishly he called me back and returned Rs 60 to me.” – Irfan, a resident of Mewat, Haryana.

This is one of the many stories shared by Archana Kapoor, the founder of Radio Mewat and the NGO SMART (Seeking Modern Applications for Real Transformation).
archana

SMART is dedicated to ‘bringing about real transformation in the lives of socially and economically backward communities’ with the use of mass media and different tools of communication, according to Archana who started this NGO in 1997, at the age of 37. She is also known for her work as a publisher, filmmaker, author and activist.

Radio Mewat, one of the many initiatives of SMART, is the first community radio station in Mewat, an extremely underprivileged district in Haryana that is located about 70 km from Delhi.

“The community radio was set up in September 2010. The one and only focus of the radio is to disseminate information that benefits the community, empowers them, gives them an identity and provides a platform for the marginalized and vulnerable sections of society to share their stories and talk about their issues.”

The radio station has received two national awards from the Union Ministry of Information and Broadcasting. It also won an award for being the ‘Most Sustainable Community Radio Station‘ in 2011 and for the ‘Most Creative and Innovative Programming‘ in 2012.

The radio station, the reporters and the team

While Archana used to visit Mewat every single day when she started out, she now has to go only once in a while because the community is learning to take over. Currently, there are 11 full time reporters, a committed managerial team and an administrative team — 75 per cent of them being from the local community.

But is it a challenge to find people who would be interested to work for the radio?

Archana does not feel so. She has seen the youth in the community being very excited about the entire set up since day one. “They love what they do. The station has given them a status and acceptance in the society. The radio has not only trained over a 100 local people, but has also provided opportunities of employment and exposure…Their involvement is beyond programming and broadcasting. If an FIR is not being lodged, Radio Mewat is expected to intervene; if a ration card is not being issued, we will be asked to help … so it a 24×7 engagement.”

Radio Mewat broadcasts 17 hours a day and that shows the kind of impact it is having on the community. As the proud founder points out – “People are getting information which they never had access to…the administration has become an integral part of the station as repeated demands from the community and airing of grievances have forced them to provide answers. Transparency in governance has increased. Panchayats have been made more accountable. For the first time in the history of Mewat, Gram Sabhas were held. This happened only after a sustained intervention through the community radio station.”

Here are some stories from and about people in the community for a clearer picture of how a radio station is actually changing lives:

“I heard about the symptoms of TB from Radio Mewat and called the station. Their reporter came to see me and took me to the hospital for the tests. I am now getting my treatment done and am not ashamed of sharing this story. I am in fact telling everyone to get their sputum tested. I now know that TB is curable.” – Shahid

Ever since she was a child, Zainab, a 29-year-old woman, wanted to study. But her parents did not let her continue with her education after grade 5. Today, she is married and lives in Palladi village in Mewat. Last year, when the radio came up with a program called ‘Masti ki Paathshala’, where they were teaching Math, she was very excited to join it.

“In this program, for every right answer to questions discussed during the program, we give the listener a star. Zainab is also participating. She listens to it regularly and calls when she has the answer. She has already collected seven stars and says that it is really good that she is able to learn Maths now. This is something she always wanted to do. So even if it is after ten years, she is able to learn now. And it is not just her; she makes her children and everybody in the family sit and listen to the program. On earning ten stars, she will get an award, even if it is a small thing,” says Archana.

While the team has overcome many initial challenges, there are still some that prevail. The most important one of them being the employment of women at the station, as families are still hesitant to send girls to work in the media sector. Archana is aiming for at least half of the content to be produced and broadcast by women. Then there are issues revolving around demands for increased remuneration, and the financial crunch. The team also has to deal with technical challenges because of limited resources.

“I have about 16 people working for me, so I had to get projects to sustain them and for their salaries. Because the guidelines are so strict, we cannot get sponsors from the private sector. So we end up looking at the government for sponsored projects…We have been able to break even now. We have been able to pay the salaries, keep the equipment working, and to keep afloat for five years.”

Archana now wants Radio Mewat to slowly become an independent community run entity, where the community realises the wisdom in supporting and running it.