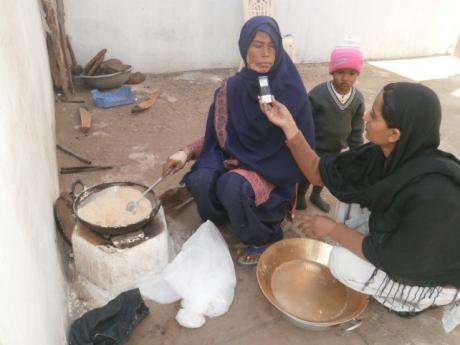 Published in Open Democracy on 26 October 2016
The transformative power of community radio for young women in India is up against a central government ban on the stations broadcasting news and discussing politics. Radio Mewat is staying on air.
Download

Warisa Bano had a dream. Unlike other young women in Mewat, she wanted to be a radio jockey. She grew up listening to BBC’s Hindi service, the only news channel her grandfather tuned in to every day. She was amazed at how a box could beam out voices from afar. She wanted to be part of this magic. Her family refused to allow her to enrol in college as they feared that an educated girl would not find a groom. Warisa had a serious problem at hand.

Mewat, a district in India’s northern state of Haryana, is not an easy place for women to have ambitions. Located 70 kilometres from India’s capital Delhi and predominantly Muslim, the region has low literacy rates and women are generally married off early. It’s not unusual for many to have 8-10 children. Ever since the Hindu nationalist Bharatiya Janata Party (BJP) came to power in Delhi, Mewat’s problems have been aggravated. Its illiteracy, unemployment and lifestyle are all being interpreted through the prism of religion.

Warisa, then aged 19, found an ally in her grandfather who, on her insistence, accompanied her to the only community radio station in the vicinity, Radio Mewat, 23km away from her home. It was the initiative of an ngo, SMART (Seeking Modern Applications for Real Transformation), which was set up in 2000. When the Government of India revised its policy guidelines in 2007 to allow not-for-profit organisations a licence to run community radio stations, which were earlier restricted to educational institutions only, SMART grabbed this opportunity. Radio Mewat was launched in September 2010. When Warisa turned up, Radio Mewat invited her to be the guest on their programme ‘Aaj Ka Mehmaan’ (Today’s Guest). Warisa was on air.

Her keenness to join the radio station resulted in a long period of negotiations with her family. They conceded but with certain conditions – Warisa had to complete all the household chores before she left home. That meant that she had to get up every day at 4 am – summer or winter – to complete her work. She would then leave home at 6:45 am, take different modes of transport to cover the distance to reach the station at 8 am. She was never late. Within no time at all she became a known voice, and became what can only be called a celebrity in her community. Warisa began receiving invitations to be the Guest of Honour at local school functions. She was invited to hoist the national flag on Independence Day in a local girl’s school, and also make the keynote address at the opening of the first women’s police station in the district, an honour by any standard but even more remarkable given Warisa’s journey. She was featured on Doordarshan, the national television channel and other local channels. In less than a year Warisa was transformed into a confident, mature woman with a voice that was known everywhere.

After 4 years of working at Radio Mewat, Warisa had a sizeable following. She decided to put her stardom to use and contested elections for local self-government – the panchayat. She lost by a whisker. She then decided to pursue a career in medicine and is now working as a lab assistant at a local medical college. She is now 23, and is still unmarried.

Warisa’s is just one of many stories that speak of the transformative power of radio, in a community where watching television is considered against the tenets of Islam, and women are not allowed to go out; there are no restaurants or movie halls, malls or gardens. Even the mosques are not open to women who are confined to the house. In these circumstances, radio has become their only companion. Until a few years back the women were not even allowed a mobile phone but at least that has changed and has now afforded them an opportunity to connect to radio. Through this device, they listen, and call into the community radio station.

From Radio Mewat they get information about local government schemes, consumer rights, nutrition, financial inclusion – a programme to help people learn about financial institutions including banks, and create an understanding of the financial services that can be accessed. Through this programme SMART helped open over 25,000 savings accounts, helped farmers access loans and insure their crops and helped landless labour borrow money to start small businesses), learn English, maths and the history of Mewat. For women, particularly the radio is a boon. It has served not only as a platform for expression but also as a one-stop shop for solutions.

In 2013, when Mewat had a sensitive District Police chief, Radio Mewat did a programme with the police department where the radio doubled up as a complaint registering centre. The majority of complaints came from women who do not feel safe going to a police station. Through this programme hundreds of issues were addressed including the presence of an illicit liquor distillery, in a predominantly Hindu village, that used to serve as a hangout for all the men. The complaint which was sent to the radio station was taken up by the police and the distillery was raided and shut down. This helped in building the credibility of both the community station and the police. Radio Mewat won two national awards for its community engagement and innovative programmes.

As a result of a government ban on news and current affairs on community radio stations and private FM stations, the radio has been walking a thin line trying to separate development news from current affairs. Despite all the constraints, Radio Mewat has helped bring in more transparency and accountability in this district. Consequently, it has also caused disquiet in the corrupt administration. Radio Mewat has been blamed for making the people aware of their rights, and encouraging them to speak up, and demand their rights.

Not being allowed to broadcast news undermines a key objective of community radio stations: giving a voice to people living at the margin. Recently, the radio station was confronted with a big dilemma when alleged cow protectors raped two women and killed two of their older relatives. Their crime was consumption of beef, an inexpensive and a high protein food for the less privileged, in an area where it is proscribed by the state of Haryana’s BJP government. This incident was followed by a clampdown on biryani (a rice dish layered with meat) to prevent local people from using cow meat. By any reckoning this was a national issue being played out in the station’s backyard, but the radio team was forced by law to not report either the incident or provide a forum for the local people to express their grievances. Besides, there was a threat from district officials that if Radio Mewat gave legitimacy to the protesters – it would be shut down.

These are difficult times for community radio stations like Radio Mewat. On the one hand the support from the government in terms of advertisements or sponsored programmes (the only way to get some financial assistance) has been stopped and on the other hand the community feels the radio is no longer a voice of the community, as it is not airing their concerns. For a community radio, which is supposed to be community owned – a radio by the people, for the people and of the people – the big question is: does one get into discussing the growing turmoil in the community or just focus on non-controversial issues like imparting education, propagating government schemes or being agony aunt to the women of Mewat? As the content of the radio programmes is constantly monitored by the central government, it is not easy to engage in discussions that the regulators could find subversive which, in turn, could lead to the lockdown of these small community run stations.

When this issue was discussed with the community, the mood was firm. Under no circumstances did they want their radio to be shut down. They were perhaps cognisant, too, of the transformative role that radio played in their lives and how it could also help in discovering the next Warisa from a remote village of this abysmally poor area when she hears the voice on her FM radio “As-Salaam-Alaikum , Namaste, this is Radio Mewat”!