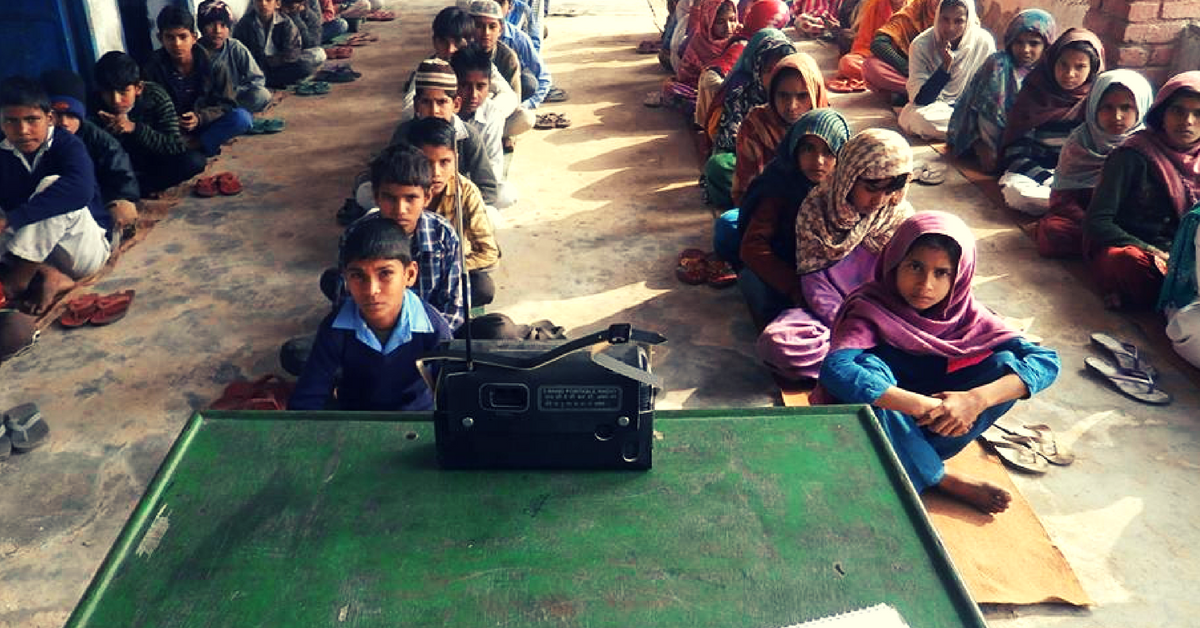 Published in The Better India on 27 September 2016
n today’s day and age of television and broadband, community radios continue to play an important role in the lives of people and even help in generating social change.
Download

In today’s day and age of television and broadband, community radios continue to play an important role in the lives of people and even help in generating social change.

Sneha makes sure she has a healthy breakfast every single day.

Muskaan keeps her surroundings clean by throwing trash only in the dustbin.

Shaheen successfully addressed her father’s concerns and convinced him to allow her to pursue her education.

Shaheen, Sneha and Muskaan are all dedicated listeners of the Galli Galli Sim Sim radio programme on their local community radio channels.

The radio programme has had an indelible impact in the lives of its listeners, including young Shaheen.

Initially, Shaheen was forced to drop out of school and help her mother with chores around the house.

“I really wanted to study further, but was scared to voice my opinion before my father. I was a regular listener of the radio programme, Galli Galli Sim Sim radio and had heard people calling in and sharing their stories. One day, I also gathered the courage to call in. I told them all that I wanted to tell my father, why I wanted to study further and my dreams for the future,” she says.

Upon hearing the episode on Radio Mewat, Shaheen’s father realized his mistake, spoke to his daughter and allowed her to continue her education.

Given the rapid digitization of television and broadband in India, many assume that radio is a dying medium of communication. However, the fact remains that approximately 40% of the Indian population does not have access to television; broadband access continues to remain unaffordable and inaccessible to millions of people at the base of the pyramid.

What they do have access to are radio sets and basic mobile phones. It is these devices that link communities, providing them with information and entertainment that is geographically and linguistically relevant to them.

With the high penetration of mobile phones, and services such as IVRS (Interactive Voice Response System). communities can easily access their local Community Radio Stations for information and entertainment. Community Radio Stations have become the de facto delivery platform for communities to access not just information, but also share grievances, raise issues, and respond to disasters. This empowers them to become agents of their own transformation.

In 2012, Sesame Workshop India started working on the Radiophone project. The project combined the power of community radio with mobile technology to reach over 1.4 million children and their caregivers across 10 remote and diverse communities in North India. The content of the programmes helped improve the literacy, numeracy and physical wellbeing of the listeners.

The project employed a community participatory approach – from developing content that was locally relevant, to building capacity and equipping the Community Radio Station partners with technology, and engaging the community to conduct research to measure the impact of the project. Radiophone was an unmitigated success. It demonstrated strong evidence not just on children’s educational and learning outcomes, but more importantly, the project created ripple effects across multiple areas. Community Radio Stations gained a listenership base consisting of women and children and the overall listenership of the station went up.

Thanks to this, families and communities slowly began to come together to discuss issues and find solutions.

On analysing the impact of the project, researchers found that some of the positive changes generated by the programme included people who stopped using tobacco, parents who took their children to get inoculated, parents who began to spend more time with their children, communities who developed better waste-management systems and much more!

While just a radio show cannot change societal norms overnight, there is no doubt that the Radiophone project proved that community radio can be a powerful medium in places where children and their families have little or no exposure or agency.

Ramchandra is a regular listener of the show and is particularly fond it as well. He wants his children to listen to it but he lives in Tigra village, which does not receive any radio signal. He carries the only mobile phone in his household to work. Since he is a driver, he is home only in the evenings.

He was told about the toll-free number of the radio show, and this has created an opportunity for the whole family to sit together and listen to the program through Radio over Telephone (RoT) every evening.

The recent Uttarakhand disaster, is also testimony to the role that Community Radio Stations can play. When all other communication channels failed, three stations – Radio Henvalvani (Chamba), Mandakini ki Awaaz (Rudraprayag) and Kumaon Vani (Mukteshwar) broadcast programs that informed and sensitized communities, and tried to reach all flood affected families with information. One year after the disaster, IdeoSync Media Combine brought together six Community Radio Stations under the umbrella Community Radio Consortium for Environment Protection (CRCEP) to continue efforts to engage communities in environment conservation.

These are only some examples of how local media, combined with technology, can help with the demographic dividend and help to build communities of change. Sesame Workshop India continues to deploy Radiophone to address critical child development issues, and is also providing solutions that can help children grow smarter, stronger and kinder.