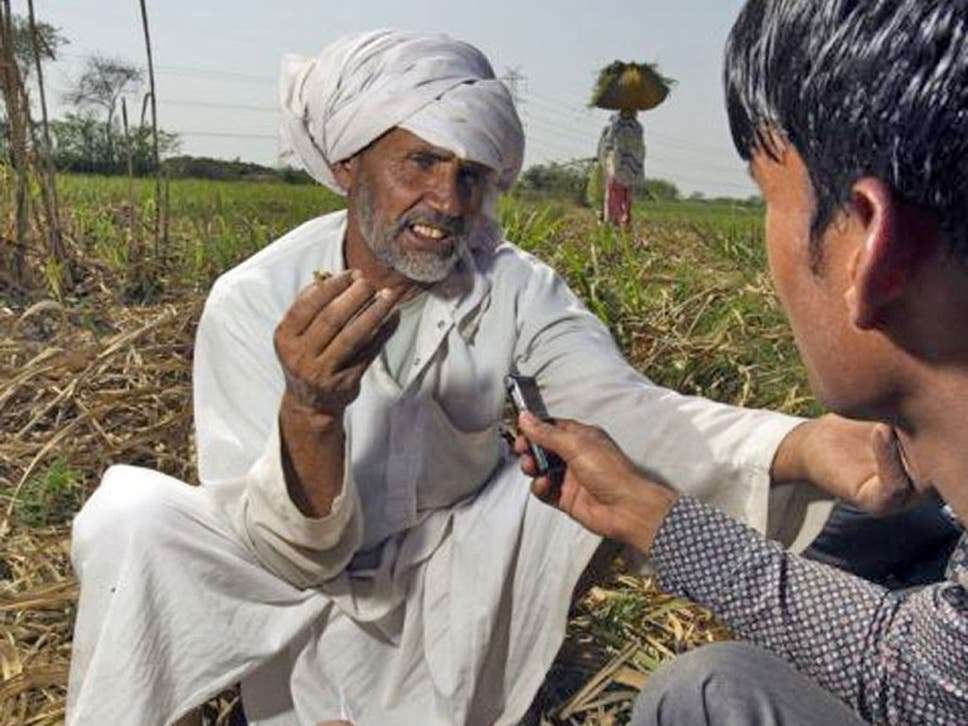 Change is in the airwaves in rural India

Beside a clump of sugarcane, brown and brittle, Mohamed Arif slipped out his electronic recorder and gently raised it towards the crouching farmer. What had gone wrong, he asked.

It was bad, said the farmer, his head wrapped in a white turban. Two years ago they had grown sugar cane and had decent results, but this year there had not been enough water. This time they could cut the cane only for animal fodder.

Mr Arif asked some more questions and then dropped the recorder back into his pocket. A couple of days later, edited with comments from local agricultural officials, the interview would make a bulletin for his radio station, Radio Mewat, and his interviewee, 61-year-old Mormal Khan, would almost certainly be among those tuning in to listen.

“Every day we listen to the evening programmes. We get a lot of information about what to sow and how to sow,” said the farmer. “I have a radio but we have no television. There is not a single television in the whole village.”

His wife, Jowri, said she liked to listen to the music and songs played by the station. She added: “When we are at home, I put it on. They talk about everything.”

There are more than 120 community radio stations operating across India. But over the last four years Radio Mewat has steadily built a reputation for helping one of the country’s most vulnerable groups, the Mewati, or Meo. A traditional Muslim farming community, the Mewati have long suffered cultural and economic discrimination. Today, although most of the community of more than 1m lives less than two hours from Delhi, in terms of job opportunities and access to health care and education, it is among India’s most marginalised.

“They demand change, but they have their own demands,” said Archana Kapoor, an activist and film-maker who has worked in Mewat for more than a decade and who established the radio station. “We have to help bring change, the way they want it.”

Before joining Radio Mewat, Mr Arif, who has three children, was employed as a freelance crime reporter for a newspaper in the town of Faridabad. It was hard work and often dangerous; once he was stabbed by someone he had upset. Now, regularly recognised by his listeners, he has become something of a celebrity.

“I was in fear for my life because I was always dealing with criminals. Now I am more relaxed, it’s a different atmosphere. It’s about learning as you go and sharing information,” he said.

Like the other members of the station, Mr Arif, 27, is himself Mewati and understands the challenges facing the community. They are simple things. Among the biggest are the absence of education, literacy and access to basic information. “Many families are ignorant about government schemes relating to developments in agriculture. Radio Mewat is the medium for distributing that information,” he said.

The station, which relies on government advertising for its revenues and has increased its programming from two hours a day to ten, has worked hard to gain acceptance among the conservative community, often suspicious of change. Ms Kapoor has held regular meetings with local leaders and while it does not permit religious broadcasts, a Muslim clergy member, Maulana Shaukat Ali, comes to the studio every week to record and broadcast Urdu lessons.

Asked about the reservations some members of the community have expressed about the potential ills of radio and television, Mr Ali said: “As long as you show the good things, then you can use any medium. If you are trying to promote bad things, then no medium is good.”

“This is a rural area. Tuberculosis and nutrition are among some of the most important issues,” he said, seated at the yellow-painted building in the town of Nuh, from which the station broadcasts. “Earlier there was a big problem with childbirth, but since more attention has been given to rural health that has improved.”

One of his biggest personal tests was researching and then broadcasting programmes on safe sex. At first, he felt awkward discussing such a traditionally taboo subject, but now he is at ease. Most recently, he visited a village and discovered the government’s women’s health worker was not informing local women of their rights and denying them free lunchtime meals. “I informed the [village head]. He said he had not been aware of this. He called the woman and said ‘what you have been doing is wrong’,” said Mr Arif.

Confirming the notion that every individual has a story to tell given the chance, one of the station’s most popular programmes is “Gaon Gaon Ki Baat”, which consists of a profile of a different village. Given that the Mewati community is spread over 1,200 villages there is no shortage of potential subjects.

Many of the problems facing the Mewati people date from the early part of the 20th Century when the area became the focus of “reconversion” efforts by conservative Hindus. Mewatis, while identifying themselves as Muslims, shared many deities and religious holidays with Hindus. A Muslim revivalist movement, the Tablighi Jamaat was formed in Mewat in 1926 by Muhammad Ilyas al-Kandhlawi to strengthen and protect the faith.

Perhaps partly because of that, the people of Mewat suffered badly during Partition in 1947. The social scientist Shail Mayaram has written that at least 30,000 Meos were killed in one district alone. More than half the population fled to the newly-created Pakistan. The number would have been higher but for the entreaties of community leader Yasin Khan and the personal intervention of Mahatma Gandhi, who visited Mewat.

“There has been long-term marginalisation that has been happening for the last four or five centuries,” said Ms Mayaram, of the Centre for the Study of Developing Societies, in Delhi. “Now, land acquisition is an issue. They are losing control of their land. They do not know it is slipping out of their hands.”

The Meo have traditionally had an oral history. All of the reporters at Radio Mewat said they learned nothing about their culture at school and instead knew only from listening to the stories of traditional musicians, or mirasis. Growing up, they would sit together in the village squares and listen to cassettes of songs and stories. Now, those songs and musicians are also featured on the Radio Mewat broadcasts.

Sajid Hussain is the station’s reporter on financial inclusion schemes. He has worked there for eight years. He too grew up listening to stories about his community but never learning about them at school. He said he was glad to be involved in a project that is finally helping his community. “All the literate people went to Pakistan, a part of our history went with them to Pakistan,” he said. “There was a vacuum.”