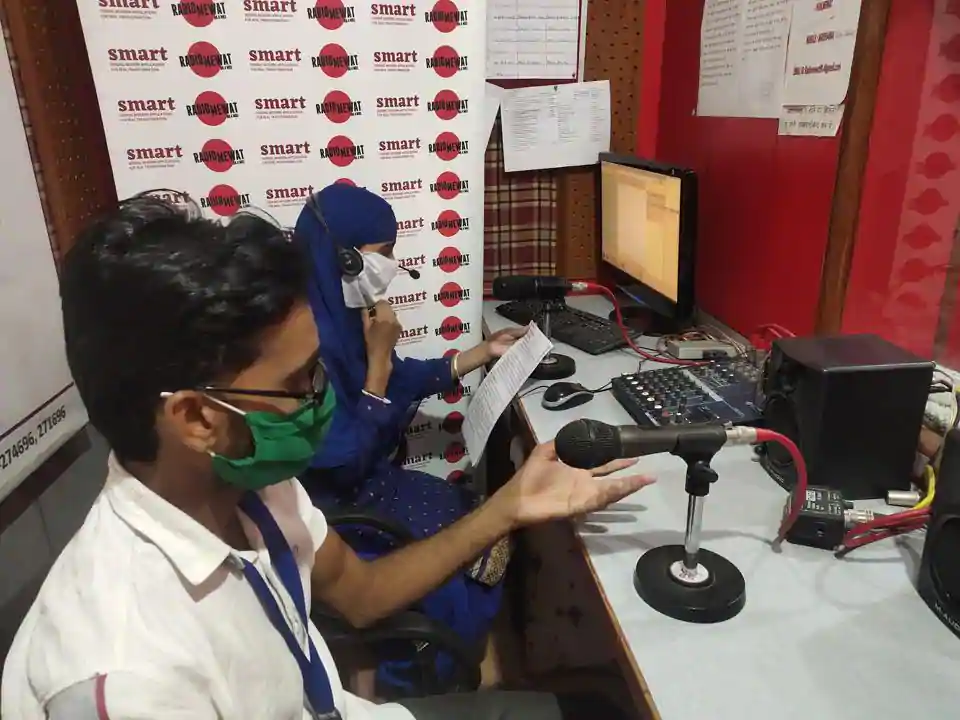 Published in Hindustan Times on 1 June 2020
It is a sweltering afternoon and Imran Khan has just started another episode of ‘Corona Se Jang, Radio Mewat Ke Sang’, a live programme, in his thick Mewati accent.
Download

It is a sweltering afternoon and Imran Khan has just started another episode of ‘Corona Se Jang, Radio Mewat Ke Sang’, a live programme, in his thick Mewati accent. “You are listening to Radio Mewat 90.4MGz. With you is your friend Imran Khan. Namaste and aadaab to all of you. Today we have with us psychologist Satish Kaushik. We will talk to him about the mental stress caused by the ongoing coronavirus crisis.”

Imran is a reporter and presenter at Radio Mewat, a community radio station in Mewat, one of over a dozen such stations in and around Delhi that have been airing special Covid-19 community-oriented and community-produced programmes.

In fact, community radios such as Radio Mewat and Alfaz-e-Mewat, which together broadcast to over 300 villages in Mewat, bordering Gurugram, have served as important sources of information and a bridge between the community and the local administration during the coronavirus crisis. This is important in a region where literacy rates are among the worst in the country and owning a television is looked down upon for religious reasons. Last year, Mewat district (now officially called Nuh) was Haryana’s only district to figure in the Niti Aayog’s list of the 111 most backward districts of the country.

In the past two months, Imran, one of nine reporter-presenters, including two women, at Radio Mewat, has been shuttling almost every day between Mewat’s villages, government offices and hospitals, conducting interviews with local authorities, doctors and the village sarpanch. “We have been at the forefront of the fight against Covid-19 in the Mewat region. Being a community radio, it is our duty to keep the community informed during the pandemic, and bring their concerns to the fore,” says Imran, who hails from Gandhi Gram Ghasera, a village in Mewat named so because, after Partition, Mahatma Gandhi had visited Ghasera village in December 1947 to convince the local Muslim community to stay in India.

“Senior district officials see us as partners in fighting Covid-19 in the region and often call us to record their messages. We were able to build trust between the locals, most belonging to the ethnic Meo-Muslim community and the administration,” adds Imran, who often walked 7km from his village to reach the radio’s studio in Nuh town during the lockdown.

Sohrab Khan, 46, another reporter-presenter, says calls from the listeners at the station’s landline phone have increased manifold, with callers asking all kinds of questions about Covid-19. “We have tied up with several doctors and other experts who answer their questions during our live and recorded programmes,” says Sohrab, who is currently hosting a programme on the problems the migrants who have returned to villages in Mewat are facing. “I am taking their issues to elected representatives and the local administration, both personally and through my programmes.”

Farheen, 21, one of the two women at Radio Mewat, who hosts ‘Hinsa Ko No’, featuring stories of domestic violence, says that a lot of women have been calling to complain of domestic violence during the lockdown. “They say that their husbands are home all the time and beat them over small things like cooking, often threatening them with divorce. We try to counsel these women, and in many cases, personally visit them to resolve the issues. Besides, a lot of women call us with questions about pregnancy and delivery during the lockdown,” says Farheen, who has studied up to Class 12. “It feels great when women in villages recognise my voice and often compliment me. I am happy that my parents allowed me to work as a reporter, ignoring protests from my relatives, in a conservative region where women are not allowed to step out.”

Archana Kapoor, founder, Radio Mewat, says the radio’s programmes during the Covid-19 crisis have been aimed at awareness, prevention and safety of local communities. “Besides, we have also been fighting myths, misinformation and rumours that spread fast in this area,” says Kapoor.

Alfaz-e-Mewat, the other community radio in the region too has been an important platform for villagers in Mewat to access information and public services in times of Covid-19. It has its studios in Ghaghas, a village tucked deep in the heart of Mewat, with the Aravalli range of mountains forming a beautiful backdrop. It has four reporters/radio jockeys, including a woman reporter, all of whom belong to nearby villages.

When the first lockdown began, the radio station started a special programme ‘21 Din 21 Baatein’ (21 Days, 21 Messages) followed by another programme ‘19 Din Aur Sambhalke’ (Be Careful for Another 19 Days) as the lockdown extended. Every day, the station broadcasts three hours of Covid-19–related programmes such as ‘Gaon Ki Chaupal’ and ‘Aaj Ka Hero’, the story of an individual adopting best Covid-19 preventive practices.

“We have also aired several folk songs in local languages around themes of social distancing and isolation to educate people. In ‘Gaon Ki Chaupal’, we regularly provide information about various government schemes during Covid-19 such as the direct transfer of ₹500 to women who are Jandhan account holders under the Pradhan Mantri Garib Kalyan Yojana (PM-GKY), and the increased wages under MGNREGA, and how to get work under it. We are villagers’ friends and guides, and they trust us since we are from the community,” says Shakir Hussain, 30, a reporter and RJ with Alfaz-e-Mewat. “These days a lot of our listeners complain that my voice has changed for the worse. I explain to them it could because I speak with a mask on. I never imagined that a mask would come between an RJ and the mike,” says Hussain. The radio’s other popular Covid-19 programmes include ‘Saavdhan’, which warns people against fake news about Covid-19 on social media.

The local administration is all praise for the community radios in the area. “They have a great connection with people in the Mewat region, and they help us quickly put out updates and stop rumours. During the lockdown, whenever needed, I simply called the stations and recorded my messages, which were played immediately on the radio. Their programming is in local languages and for them, local issues are most relevant,” says Pankaj (known by his first name only), the deputy commissioner of Nuh district.

Beyond Mewat too, there are several community radio stations such as the Noida-based Salaam Namaste and the Gurugram-based Gurgaon Ki Awaaz that have been running a range of Covid-19-related community-oriented programmes. Salaam Namaste, the first community radio station of Noida and Ghaziabad, has been airing programmes such as ‘Doc on Radio’, which offers free tele-consultations with doctors; ‘Health From Home’, a programme providing tips by pulmonologists on the prevention of Covid-19 and ‘Corona Salaam,’ aimed at distance education for local underprivileged children. “There has been a 40% increase in our listenership during the Covid-19 crisis. We host a mix of health and education programmes and worked closely with local communities as well as RWAs,” says Barsha Chabaria, station head, Salaam Namaste.