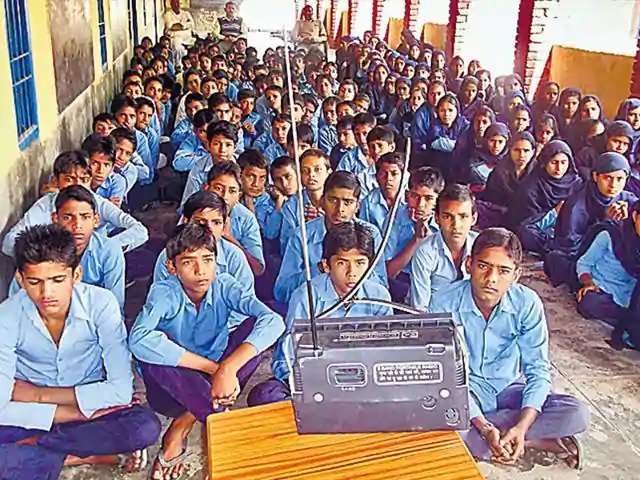 Published in Hindustan Times on 5 April 2015
In this region of wretched poverty not far from Delhi, Mohd Arif, 28, and colleague Warisa, 23, are part of a team of intrepid reporters for a rural radio station.
Download

In this region of wretched poverty not far from Delhi, Mohd Arif, 28, and colleague Warisa, 23, are part of a team of intrepid reporters for a rural radio station. From a humble studio, they break the day’s biggest story that quickly fills the local farming community.

The newsmaker on a particular day is a young boy, part-time farm help and part-time student, who finally manages to succeed in school.

Recently, the reporters blew the lid off a shocking scam: a fraud by the headman of Golpuri village who stole cash meant for the rural jobs scheme, NREGA.

India is re-imagining the role of community radio, planning a string of such hyper-local stations to serve social, strategic and even political goals, a plan set in motion by Prime Minister Narendra Modi.

Predominantly Muslim, Mewat has been a reference point for backwardness, with high poverty and low literacy rates. It lags in six among eight national socio-economic indicators, including two health indices, according to a 2008 baseline survey by non-profit Institute for Human Development.

Deeply conservative, the area is the birthplace of the Tablighi Jamaat – a global Islamic revivalist movement often assumed to be radical.

Mewat Radio, a small-budget station exclusive to the area, is helping to bring progress with its 11 beat correspondents who track the area’s agriculture, crime, development and women’s health.

Community radio isn’t new, but the information and broadcasting (I&B) ministry – which controls broadcast policy – plans to aim it at vulnerable areas or communities.

These low-power stations use special spectrum – or radio bandwidth – reserved for social goals and typically cover a 20-km radius.

“FM-dark” areas not serviced by private or state radio are being identified, including those where disadvantaged sections find it tough to benefit from welfare programmes.

A special plan is to cover 106 districts in nine states plagued by a violent Maoist insurgency.

These are only the most recent steps by the ministry to create a web of such networks through a state-funded, non-commercial radio expansion.

“The home ministry and we have come together to promote such radio in left-wing extremism-affected areas to bring the government and people together,” said Bimal Julka, the I&B ministry’s top bureaucrat.

The overall scale seems impressive: the ministry has already licensed 409 stations across the country.

Some station heads interviewed by HT feel the platform is too tightly controlled and government ads — its lifeline — are sluggish to come by.

“We need to submit CDs of three months’ programming. Now, an organisation is being given the task of total monitoring,” one of them said, seeking anonymity.

Julka said his ministry was fine-tuning the policy, which will fund up to 50% of investment upfront, apart from boosting government ads, such as those of Swachh Bharat, a flagship sanitation programme. A typical rural station costs nearly `12 lakh to launch.

A mix of licensing and administrative shackles may be stifling, but rural radio could give a new edge to authorities to fight social ills.

“The government’s intentions are good, but we need more freedom and faster bureaucracy to be able to go far,” says Archana Kapoor, director of Radio Mewat.